With the remaining half day I had in Sydney, I stopped by the Art Gallery of New South Wales.  I really have had no exposure to Australian artists, but the museum provided quite an education.  The subject of most of the earlier paintings was the wild landscapes of Australia, but you can also find work from throughout Australian history.   The works range from Aboriginal art to 19th century impressionism to innovative modern art sculptures.  One of the paintings that struck me the most was one called Important People by George W. Lambert painted somewhere between 1914 and 1921.  The painting depicts three adults: a flower seller, I wondered what story might unite the three adults depicted and what message Lambert was trying to convey through the painting, probably a satire of social snobbery. 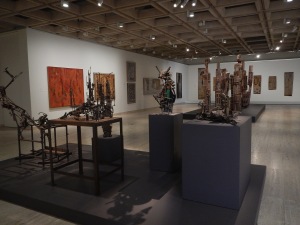 With my time in Sydney running out, I walked to a train station in Hyde Park and rode a train to the Sydney airport.  There, I boarded a flight to Melbourne, Sydney’s rival city to the southwest.

While Sydney is an older city than Melbourne (founded 1835), it was Melbourne that held the title of Australia’s most important city for years, especially in the late nineteenth and early twentieth centuries.  Melbourne’s architecture still holds much of the Victorian grandeur of its earlier ages (the Flinders Street Station depicted above for example), while still glittering with modernity.  Sydney has a more dramatic natural setting, with its harbor, cliffs and beaches.  Melbourne is more understated, carrying with it a sense of sophistication without being too snobby.  Public art in Melbourne is everywhere there, from the sides of the highways to the graffiti covered alleyways in the CBD.

After arriving in Melbourne and getting settled, I had dinner in the Central Business District at a restaurant with a sushi train.  I got to see Federation Square and the Flinders Street Station.  If you do visit Melbourne, be very mindful of the trams.  My friends and I witnessed a woman get struck by one while crossing the tram tracks.  It seemed that she wasn’t paying attention.

I would be renting a car and driving the following day from Melbourne to Wilsons Promontory, but one thing that frightened me a little were these crazy hook turns that cars do in the Central Business District when making right turns.  Not only would I have to get used to driving on the left side of the road, but in certain places you actually have to get into the left lane to turn right so you don’t block oncoming trams.  It actually looks and sounds more complicated than it is in actual practice.