My Melbourne friends, Aydin and Ben, helped outfit me for an overnight camping trip to Wilsons Promontory National Park, a wilderness area located at the southernmost point in mainland Australia.  To get there, I rented a car in Melbourne’s Central Business District.  Driving on the left side of the road took some getting used to and even with GPS, I made several wrong turns and had to do one of those infamous Melbourne hook turns in the city before finally getting on the highway to Wilsons Promontory.

Driving became much easier as I left Melbourne and hit the open road.  The landscape was beautiful, rolling green farmland and eventually views of the ocean and the mountains at Wilsons Promontory. 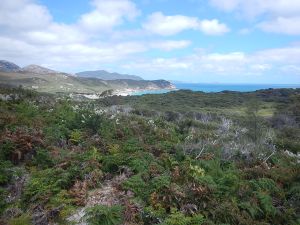 Once inside the park, I found my campsite at the Tidal River campground and set up my tent.  I had reserved an unpowered campsite for about $20 AUD.  Unfortunately, I made the mistake of not figuring out how to set up the tent before I left Melbourne so I’m very thankful to Ben for his help over the phone and that cell service is available in the park.  After setting up camp, I decided to go on one of the short hikes available from the Tidal River site.

Crossing the Tidal River feels like you are being transported back to prehistoric times.  Red and blue rosellas flew from tree to tree, warbling with their music.  Eucalyptus trees raised their leafy branches to the sky as I followed the trail up the slopes of the mountains. 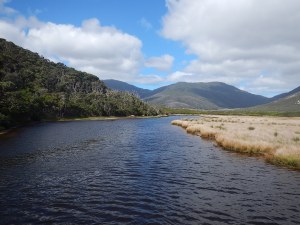 I first walked to Pillar Point, which has stunning views of the ocean and Norman Beach and Squeaky Beach below.

From Pillar Point, I walked down to Squeaky Beach.  The beach gets its name from the squeaking sound your footsteps make as you walk through the sand.  The squeaking sound is due to the quartz content in the sand.  It was nearing the end of the day, so I had the entire beach to myself, all quiet except for the sound of the roaring waves and the squeaks in the sand from my footsteps. 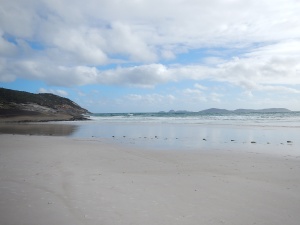 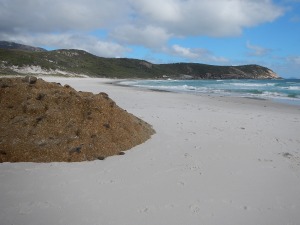 As night fell, furry wombats emerged from the woods and into the campsite.  They are certainly cute little critters, but you have to make sure you lock up your food because they’ll get into it.

I had been a little apprehensive about the trip to Wilsons Promontory for a few reasons: driving on the wrong side of the road in a foreign country, hiking solo in a wilderness area in Australia and camping out with who knows what kinds of deadly snakes and spiders.  Everything turned out great however and seeing all of the scenery and wildlife was an unforgettable experience.  As I fell asleep early to sounds of wombats scurrying around and rosellas and cockatoos singing their last songs of the evening, I had forgotten that it was Halloween night.  I suppose I had already faced enough fears for one day.

One thought on “Day 14: Braving the Wilds at Wilsons Promontory”