The sun comes very early in the Northern Territory in late spring, so we had to rise early from our campground to catch the sunrise.  At this time of year, the sunrise viewing areas are not actually situated to capture much of the sun’s rays, so our tour guide actually took us to the sunset viewing area to watch the sun rise from behind the rock, creating a silhouette.  My photographs simply don’t capture the amazing sight of the sun glinting behind the rock. 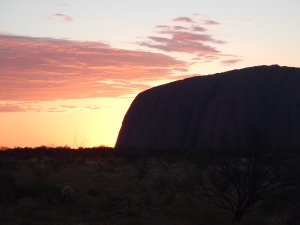 After watching the sunrise and eating breakfast, we made our way to the base of the rock to hike around it.  Our tour guide pointed out the various features of the rock.  Some portions of the rock have such spiritual significance that the Aboriginal caretakers prohibit photography in those areas.

Looking at the features of the rock is a bit of a Rorschach test.  Each person sees different things in the crevasses and cracks.  As we hiked around the rock we saw a dingo running by, which brought to mind the Lindy Chamberlain case and its depiction in the movie A Cry In The Dark, starring Meryl Streep (Dingo ate my baby!).  The weather was extraordinarily hot that day, so we had to cut the walking tour short.  We ended up spending the afternoon cooling off by the pool and having a few drinks in the lounge of one of the more posh hotels to take advantage of their Wifi.

After some hours of rest and recovery, we returned to the rock to see some petroglyphs as well as a water feature up close to the rock.

Uluru carries with it a great deal of history, whether one is interested in geology or the creation stories of the Aboriginal caretakers, whose own history is shaped by this forbidding yet beautiful deep red country