We left Coober Pedy in the early morning and made the long drive to Uluru.  We stopped briefly to watch the sun come up along the Stuart Highway.  A wedge-tailed eagle sat perched in a tree the whole time, making for a remarkable silhouette shot. 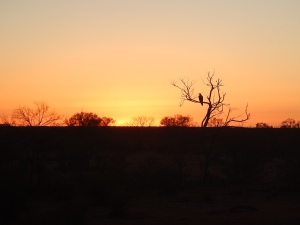 After we turned on the Lasseter Highway, named after a man who had claimed there was a reef of gold and died trying to rediscover it, the hills became redder and there were more trees lining the road.  These resembled pine trees but are actually desert oaks.  We approached a high plateau that I initially mistook for Uluru, but it is actually Mount Conner.  Other tourists have made the same mistake, so it is known as Fooluru.

Mount Conner is owned by a man named Peter Severin, a rather controversial figure.  He was the person who installed the chain on Uluru to enable climbs to continue.

After many more miles, we crossed into Aboriginal lands and ultimately saw Uluru (Ayers Rock) in the distance.  We checked into our campground, which is part of the Ayers Rock Resort.  The resort had formerly been located right at the base of Uluru, but after the lands were handed back to the Aboriginies in the 1980s, it was requested that the resort be moved off to another location further away.  The resort, which includes campgrounds, a hostel, and a few hotels is the only overnight accommodation available close to the rock.  Otherwise, Alice Springs, four hours away has the closest motels.

Our guide drove us around the rock and explained its history as well as the some of the significance of certain features of the rock to the Anangu people.  Certain parts of the rock have sacred meaning and not supposed to be photographed.

What a lot of people don’t realize is that Uluru is not significant to Aboriginies throughout Australia, but only has special meaning for the Aboriginies of the surrounding area.  They had several different tribes and languages and would consider themselves as different as Bulgaria is from Britain.

We returned to the park to watch the sunset.  Unfortunately, there were a lot of clouds in the sky which did not allow us to see the rock turn a deep shade of red for which is it famous.  There were a few fleeting moments where the rock captured the fading sunlight, however.

Whether you get the perfect sunset or not, Uluru is an enchanting place to visit, full of history and mystery.