Leaving Adelaide, we drove up through rolling yellow hills to Clare where we sampled some wines at the Sevenhill Cellars, a winery that had been established in 1851 by Austrian Jesuits.  Before our tasting, we explored the St. Aloysius church, a Gothic Revival structure built from local stone, including the crypt underneath the church.  Our wine tasting then got underway.  We tried several different varieties from the winery.  Of these, I really liked the Inigo Riesling, the Four Buckets Rose and the Classic Topaque dessert wine.

From Clare, we drove towards the Flinders Ranges.  The landscape had fewer and fewer trees on the rolling yellow hill.  We stopped for a long hike in Alligator Gorge near Mount Remarkable.  It was on top of a plateau, so the hike was mostly flat. 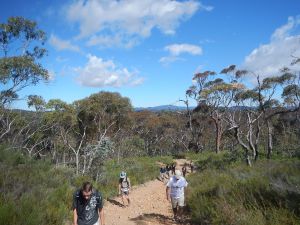 We saw a few kangaroos, some emus and a monitor lizard.  At first, the monitor lizard looked scared and climbed up a tree, but then seemed to act somewhat aggressive.  We followed the trail all the way to an overlook where you could see all the way down to Port Augusta.

We continued the drive to Wilpena Pound where the sunset brought out the reds in the natural amphitheater there.  At one time it was a large body of water. 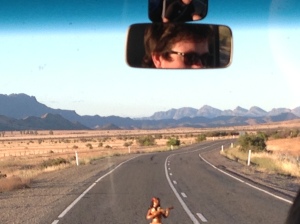 We set up camp and slept outside in swags.  With swags, you put your sleeping bag inside this outer shell that you zip up like a caterpillar.  I enjoyed looking at all the stars in the sky and drifting off to sleep.  It was on this portion of the trip where I felt like we were really leaving civilization behind and entering into the heart of Australia.