Downtown LA is sometimes spoken of derisively, a place that empties out at 5 o’clock and is known more for the appalling conditions of Skid Row rather than having anything charming to offer the curious visitor.  My relatives who live in Los Angeles warned me that it can be dangerous, but also noted that it has some interesting places worth exploring.  Indeed, Downtown Los Angeles has a lot to offer and I’m glad I was able to take some time to wander its streets and learn more about it.

I followed a portion of a self-guided walking tour which I found at http://www.downtownlawalks.com.  I parked my rental car in the garage at Pershing Square and began at the Millenium Biltmore Hotel.  The Beaux Arts style hotel has an elegant and enchanting lobby mixing Renaissance and Moorish styles.

I turned my attention to Broadway, LA’s historic commercial and theatre district, Broadway has several beautiful old theaters, some of which are crumbling with neglect waiting for someone creative to restore them to their former glory.

With some of the development in the area, it looks like the tide is finally turning and this area may thrive once again.  I visited my friend Pablo (a former New Yorker who recently moved to LA) who gave me an informal tour of the area, pointing out some revitalized buildings, new restaurants and insightful stories about the growth of downtown Los Angeles.  His apartment building has some beautiful art deco features as well as incredible views from a rooftop terrace.

After visiting with Pablo, I went to the Los Angeles Central Library and explored the building.  The library provides a self-guided tour and information pointing out the art and architecture throughout the building.  The lowest floor has an extensive history and genealogy section, which I wish I had more time to explore. 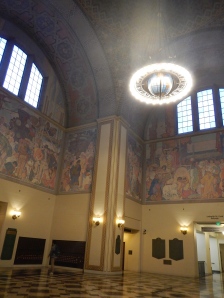 Downtown LA is still a bit rough around the edges, but is definitely worth a visit.