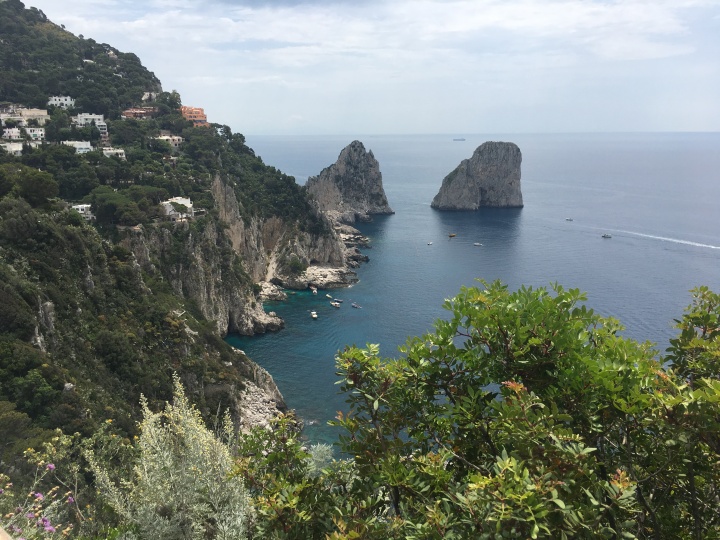 The day after our visit to Vesuvius and Pompeii, we turned our attention to Capri, which has charmed visitors ever since Roman Emperors discovered artifacts of an even more ancient people and constructed temples and villas on the island’s limestone cliffs. Through the centuries, Capri has attracted writers and artists, the rich and famous, and  daytrippers from Naples and the Amalfi Coast.  We decided to explore the island for the day as we traveled from Naples to Positano.

I was a little nervous about how everything would go for this part of the trip, but everything worked about well. We started the day with an early breakfast at our seaside hotel in Naples, admiring the view of the bay and the Castel dell’Ovo. We took a taxi from the hotel to the port from where you catch the ferries and hydrofoils to Capri and Ischia.

We boarded the ferry boat and lugged our suitcases into the seating area inside.  We traveled by boat a number of times with our luggage on this trip, but the ferry companies don’t really make it clear where bags can be stored.

The skies were a little gloomy.  The ocean seemed mostly calm but out into the bay it seemed a little choppy.  The wind was blowing, waves undulating, a drizzle of rain.  All of that made me concerned that the famed Blue Grotto would be closed.  However, all of these fears proved unfounded.

Once the hydrofoil arrived in Capri, I quickly noticed a store offering luggage storage at the end of the pier.  I had read in an old guidebook that luggage storage was available there but I was nervous that this might not be around anymore.  With our bags stored and tickets bought for our evening boat trip to Positano, it was time to start exploring Capri.

We decided to see the Blue Grotto first because we heard that the waiting times can get very long later in the day.  Del bought our tickets, decided on the quick Blue Grotto trip option rather than a 2-3 hour boat trip around the island.  Choosing this gave us a lot more time to explore the island.  We climbed into a motorboat with 10-20 other tourists.  It pulled away from the Marina Grande and followed along the steep, rugged edge of the island.  Far up on the side of the cliff, at the edge of the island, stood an enormous, yellow mansion.  A road held up by a marvelous feat of engineering seemed to lead straight to the mansion.  Later that day, we would actually travel on that winding way on the way to Anacapri.

There was a gentle fall of rain.  The only waves in the water were created by the passage of other motorboats as we traversed their wakes with sudden splashes of seawater.

Once we reached the Blue Grotto, we noticed the small entrance and the boatmen guiding tourists from their boats into their own smaller boats, in groups of 2-4 and navigating them into the cave.  Atop the cliff was a place were visitors could walk down stairs and board rowboats from there rather than arrive in the area by boat.

Del and I joined another couple in one of the rowboats and the boatman rowed up to the small opening of the cave.  We had to lie down in the boat completely in order to get inside the tiny aperture.  Once through the opening, the boatman told us to look back to the grotto entrance to admire the sapphire blue water.  The cave was filled with the echoing songs of the boatmen.

After returning to the Marina Grande, we joined crowds of arriving tourists on the funicular up the hillside to the town of Capri.  We spent some time wandering through the streets of Capri, lined with high-end boutiques and shops.  A short walk from the town took us to the Tiberius Gardens.

Roman Emperor Tiberius left Rome in 26 CE and reigned for his last ten years from the island of Capri, in order to, according to Suetonius, yield to “all the vices he had struggled so long to conceal.”

The Tiberius Gardens were divinely beautiful, with a view of the karsts that have come to be a symbol of Capri. It was spring so everything was lush and blooming. 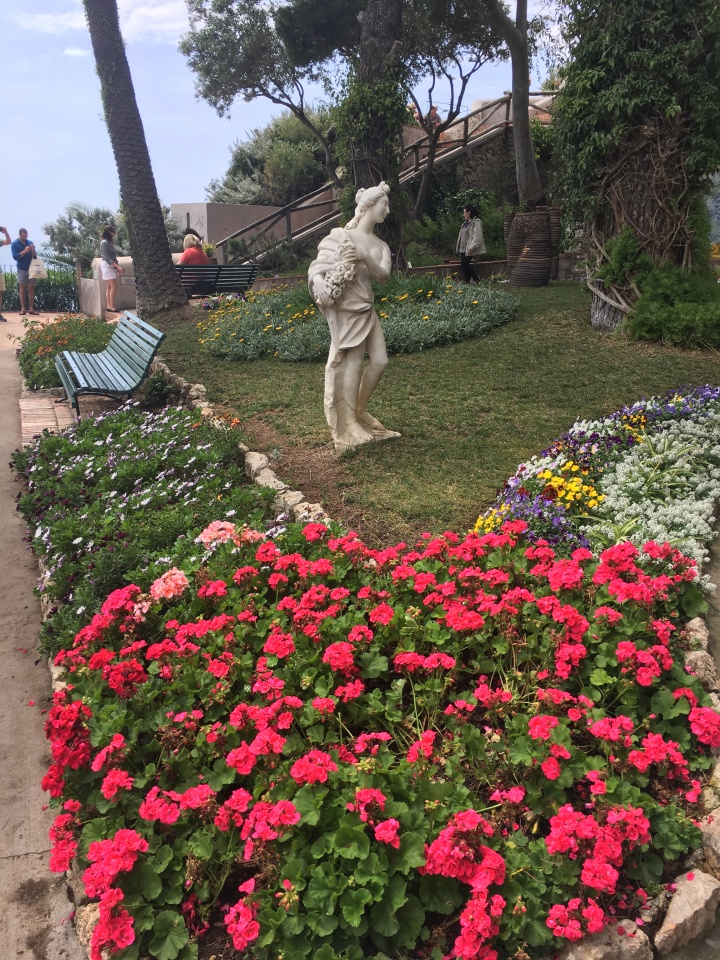 Near the Tiberius Gardens is the Villa Krupp.  Friedrich Alfred Krupp, who lived in the late nineteenth and early twentieth centuries, was a scion of a wealthy German family that made steel and armaments. He used to throw wild male-only parties at his Caprese villa and caused a scandal.  Krupp’s wife reported these goings on to the Kaiser, who responded by having her institutionalized in an insane asylum.

After being turned away from a hotel restaurant with a magnificent view, possibly because we didn’t look posh enough, we had pizza and Caprese salad at another hotel restaurant.  From there we walked back up into the town and stood in line for the bus to Anacapri. The time is took to get on the bus made me a little nervous about getting back to the marina for our boat to Positano.

The ride to Anacapri took us up the winding road we noticed on the way to the Blue Grotto.

Once in Anacapri, we rode up the chairlift to Monte Solano where we took in amazing views from there of the whole island.  You could also see Naples and Vesuivus off in the distance.  I remember the intense beauty of everything going up and down the mountain, the singing birds, the heavily perfumed air, the heavenly breeze. 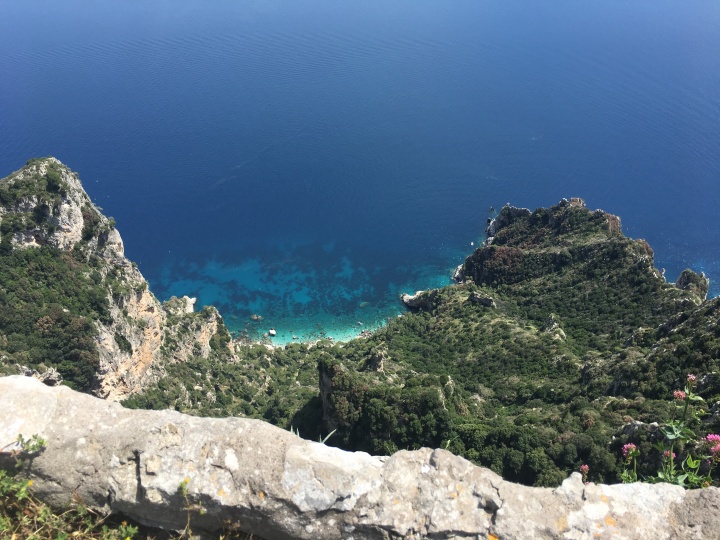 Back at the bottom of the mountain, we explored Anacapri, including the Chiesa di San Michele Arcangelo (1719) with its ornate mosaic floor, depicting the Garden of Eden.

Getting back to the marina was a bit stressful.  We walked to a bus stop and waited forever for the bus.  There wasn’t enough room on the first bus that arrived so we had to wait for the next one, a half hour.  However, forty-five and fifty minutes went by and the bus still had not showed up so we decided to join split a taxi with some Canadians who also had a ferry to catch down at the marina.  We retrieved our luggage and boarded the ferry to Positano.

Once we arrived in Positano, we had to have luggage porters take our bags up to our hotel.  They said it was impossible to walk there.  It wasn’t impossible, just extremely exhausting.

We enjoyed a nice dinner with delicious food and a festive atmosphere that night at Ristorante Mediterraneo.

We certainly crammed quite a bit into this day of travel.