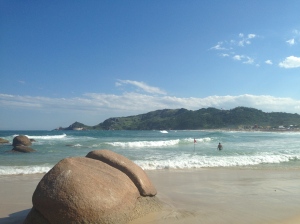 For foreigners, Carnaval in Brazil typically conjures up images of Rio de Janeiro’s colorful and famous Carnaval celebrations with its all night parades, blocos, beaches costumes and samba music.  However, Florianopolis, a less populated Brazilian city located on a verdant, mountainous island in the south of Brazil, also offers a chance to party like crazy during Carnaval and enjoy interludes of serene (or not so serene) beach time.  This was my second trip to Florianopolis over Carnaval, and this time, I spent an entire week enjoying the island.  Florianopolis is probably one of the nicest, cleanest and safest cities in Brazil, very popular with sunseekers from southern Brazil (especially Sao Paulo, Porto Alegre) as well as Argentinians and Uruguyans. For the most part, it seems that Americans have yet to discover this place; however, I met a handful of expats who have discovered and subsequently fallen in love with this magical place and decided to stay.

I started my sojourn in Florianopolis with a couple of days based in the city center (Centro).  Other than a couple of dinners, I didn’t really get a chance to explore this area too much, which is full of high-rise apartments, somewhat resembling Miami.

I stayed at the Sofitel with a friend of mine from Atlanta.  The hotel is located in a clean and safe part of the city, although it is not very close to the island’s more famous beaches.  Last year, I only visited one beach in Florianopolis (Praia Mole), so I wanted to check out another one on the island.  I decided on Jurere Internacional, located on the north part of the island.

Traveling around Florianopolis is somewhat of a challenge if you don’t have your own rental car.  With the heavy traffic that clogs the roads during Carnaval, navigating the island can be a challenge even if you do have one.  My friend and I took the yellow express bus from outside the Sofitel to Jurere.  It took a really long time for the bus to arrive, but it was fairly comfortable and got us up to Jurere in about twenty minutes.

Jurere, a playground for Brazil’s rich and famous, is a relaxed beachfront area with lots of large, often architecturally innovative, homes lining peaceful streets within an easy walk to the beach.  It was the Thursday before Carnaval, so things were somewhat quiet at the beach the day we explored the area.  While Jurere is known for being expensive, we found an inexpensive place for lunch called Sergio Lanches which offered a set menu for a reasonable price.  The beach itself was beautiful, although we got caught in an afternoon rain shower that nearly soaked us through.  We didn’t stay in Jurere for the night, but Jurere’s nightlife scene attracts big-name international DJs.  Its nightclubs often charge covers of as much as $500 USD, especially if hosting a famous DJ or during events like New Year’s Eve (Revellion) or Carnaval.

Taking the bus back to the Centro was challenging.  We waited forever for a bus to show up and after we did, it filled up with people and became uncomfortably crowded.  The bus stopped at a station midway between Jurere and Centro and we boarded a bus that was much less crowded.  My advice for avoiding headaches in getting around the island is to see if you can find a bus schedule, get where you’re going early and try not to ride the bus during rush hour.

The next day, my friend and I made our way over to Praia Mole and linked up some more of my Atlanta friends, three of whom had been to Florianopolis with me the year prior.  We stayed in a condo complex within easy walking distance to the beach.  The owner of the condo is a surfer dude from California who rents a number of properties in the same condo complex.  If you’re planning on going to Florianopolis for Carnaval, make sure you rent your place as early as possible!  We enjoyed the location of the condo so much last year that we reserved it almost nine months in advance.

Praia Mole itself is one of my favorite beaches in the world.  As you look towards the ocean, on your right are a series of jungle-covered hills that resembles a dragon swimming in the water.  On the left is a pile of large rocks, an excellent location for taking photos and watching the waves pound against the rocks.  Praia Mole’s giant waves are excellent for surfing, but can also make for soaking surprises as you walk along the beach as they often wash up far into the beach.  Over the pile of rocks lies Praia Galheta, a less crowded, clothing optional beach with similar dramatic scenery. 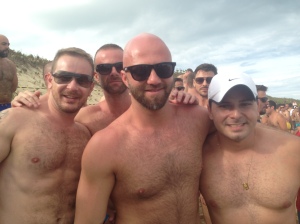 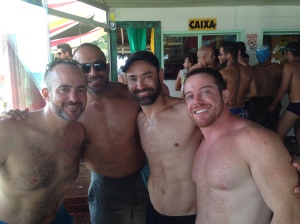 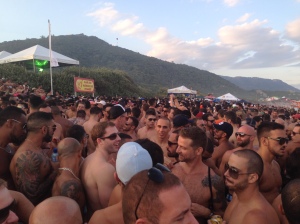 Brazil beach culture differs from beach customs in the United States in some ways.  One thing I really enjoy about it is that you don’t need to take a lot of things down to the beach with you.  Brazilians don’t bring their own chairs, tents and coolers of food and drinks, but instead rent their chairs and umbrellas and buy caiparinhas, acai and sandwhiches from vendors at the beach.  During Carnaval at Praia Mole, most of the people spend their time cruising up and down the beach, dancing at The Week’s club on the beach or Bar do Deca, so there’s no need to bring too many things down to the beach with you.

This year, I was fortunate enough to already know several guys from Brazil who were in Florianopolis for Carnaval.  It was great catching up with them and meeting some great new friends as well.  I was glad that we followed up our trip last year with another trip year.  It was also nice to be able to speak more Portuguese with these old friends and even get a few compliments on my progress.  I still have a long way to go, however.  Hopefully, my trip to Florianopolis has cemented the friendships that I have already made.  I feel like it also provided me with a larger network of people in Brazil as I try to figure out what I’m doing here. 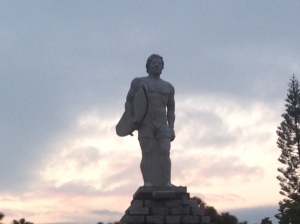 Our condo was located next to the Praia Mole Eco Village, a resort (if you can call it that) with a statute of a “surfista” out in front on the highway.  In years past, the Praia Mole Eco Village has hosted the temporary location for Rio and Sao Paulo’s premier LGBT club The Week during Carnaval and Revellion.  This year there was a bit of drama because the Praia Mole Eco Village came under new ownership.  The new owners promptly terminated their contract with The Week, apparently with the hopes of developing the club space for year-round events.  Ultimately, the WE Party, an international circuit outfit based in Spain said that it would take over hosting parties at the Eco Village location.  The Week eventually said that it would also be hosting parties and established a location in the hills above Bar do Deca.  Apparently, this resulted in some circuit party cattiness, when the organizers of the WE Party accused the Week of destroying the environment at its new location, etc.  Ultimately, the Week triumphed at Carnaval.  Its parties were much better attended and reports from the WE Party were that the space was very nice and the music was great, but hardly anyone showed up to enjoy it.  I attended the four parties at The Week .

The parties at The Week run from about midnight to 6 AM.  It’s probably a good idea to show up early if you want to pick out your spot on the dance floor and not wait in long lines for tickets or drink coupons.  At the Week, you buy a set of drink tickets and then use those at the bars while buying your drinks.  If you run out, you just go back and get more.  No tipping of the bartenders is expected.  I would also advise buying the complete set of tickets if you think you’re going to attend most of the parties.  The prices are much higher if you try to buy them at the door.

The stage the Week set up was impressive, although not quite as impressive as what they had last year.  You could tell that it was put together over a much shorter period of time.  With all of the uncertainty around whether they were going to have the parties at all, The Week did an outstanding job.  While there weren’t as many big screens and laser lights, what they had still made for a spectacular show.  The DJs were superb as always: especially Isaac Escalante, Tomer Maizner, DJ Abel and others.  You can find some of the DJs’ Florianopolis Carnaval sets on SoundCloud.

One of my friends celebrated his 40th birthday while we were in Florianopolis, so on that night (morning actually) we wore some special costumes that he designed.  On other nights, we wore Halo belts, which helped us locate each other on the dance floor.  It can get super crowded in The Week, so it was very helpful to have these. 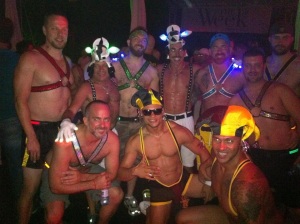 I really loved my second Carnaval-crazy trip to Florianopolis.  In some ways, it was like taking the exact same trip I took last year, but having done it before gave me a quite a bit more confidence and having more friends there made it even better.  It was also special being able to kick off the Brazil phase of my journey with some of my dearest friends from Atlanta.  After they left, I really missed having them around after enjoying several fun filled days with them.  At the same time, I am excited about being able to deepen my friendships here in Brazil as I live here for a while and begin to learn a new language.

10 thoughts on “Carnaval in Florianopolis”