We arrived in Kings Canyon in the afternoon after a long drive from Uluru.  The day was slightly overcast with some drizzle.  We stayed at the Kings Canyon Resort, which is actually a campground relatively close to the canyon.  Some of us took a ride on quadbikes through the rolling red hills and around scrubby trees blackened by past wildfires.  Up the gradual ridges you could see the red rocks of Kings Canyon.

Our hike through Kings Canyon, the six kilometer Kings Canyon Rim Walk, began the next day just before sunrise.  Because the weather was forecast to be dangerously hot again, we needed to start the hike early.  The most strenuous part of the hike was first, Heartattack Hill, a stairway to the top of the canyon.  Now and then we paused to take photos of the wall of the canyon bathed in the pink light of the sunrise.

We made our way up through gorges of rock, up through a V shaped opening which was the filming location in The Adventures of Priscilla Queen of the Desert where Bernadette says to Felicia who is standing at that spot: “That’s just what this country needs: a cock in a frock on a rock.”  Interestingly, the scene was originally to have been filmed on top of Uluru, but the scene was changed to Kings Canyon after the Aboriginies objected to the idea of three drag queens gallivanting on the sacred rock.

Our hike continued to the breathtaking Cotterill’s Lookout.  A white man and an Aboriginal man built a wooden bridge so that visitors could look out over the deep canyon.  The edge of the canyon offers remarkable views. 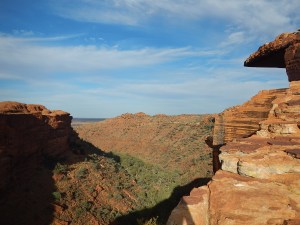 Further on in the canyon hike, we walked down into a verdant, palm tree filled area known as the Garden of Eden.  The Garden is a remnant of a time when oceans roared over the land and when it was once lush and tropical area. 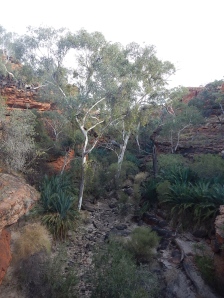 After the Garden, there were several more beautiful, red canyon scenes to walk through.  While the hike was long and sometimes arduous, it was worthwhile seeing this amazing place.