My tour group started out early in morning for a scenic drive along the Great Ocean Road.  Melbourne looked like it had a bad hangover after Melbourne Cup Tuesday and was sluggishly returning to work.  We made a stop for coffee at the delightful Kobo Cafe in Torquay, a picturesque surfer town, before making our way to Bells Beach.

If you’re a fan of the movie Point Break, you’re familiar with Bells Beach, the place with the 100 year storm where Johnny Utah, an F-B-I Agent portrayed by Keanu Reeves, allowed Patrick Swayze’s character to surf the giant wave and chance certain death rather than be apprehended.  The movie wasn’t actually filmed there, but Bells Beach is a legendary surfing spot nonetheless.  We enjoyed watching the surfers suit up and ride the waves accompanied on the seafoam by playful dolphins.

Along the Great Ocean Road, we stopped saw several koalas perched in eucalyptus trees at Kennett River, lunched in the charming town of Apollo Bay, and meandered through a rainforest at the Maits Rest Boardwalk.  There were stunning views of the coastline along the way.  We stopped again along the road in Great Otway National Park and again saw lots of koalas (mostly sleeping) in eucalyptus trees.

Eventually, as we neared our accommodation in Port Campbell, we reached the main attraction along the Great Ocean Road—the Twelve Apostles.

The Twelve Apostles are some of Australia’s most iconic sights, tall limestone stacks facing a raging blue ocean; however, there aren’t actually twelve of them.  There are only about seven and due to the constant surf and erosion of rock, and the number will only decrease.  Actually, there weren’t even seven when they were named, but it was thought that the Twelve Apostles would be more appealing that the original name – the Sow and Piglets.

A little further down the road from the Twelve Apostles, the scenic Loch Ard Gorge carries with it a story of one of the many shipwrecks on the Victoria coast. 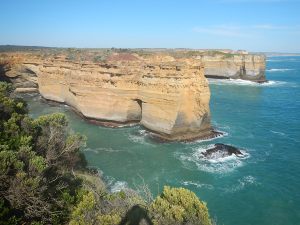 The Loch Ard was a clipper ship that sailed from England in 1878, bringing immigrants to Melbourne.  The ship ran aground and fell apart in a storm.  Only two people survived the wreck, a nineteen year old apprentice officer named Tom Pearce, who could swim, and Eva Carmichael, an Irish girl, also nineteen, who could not.  After finding his way to shore, Tom heroically rescued Eva from the wreck.  The media at the time fabricated a possible romance and engagement between Tom and Eva, but a marriage never happened.  Eva ended up returning to Ireland.

The Great Ocean Road has spectacular views at just about every turn and lots of stops for viewing wildlife or learning about the history of this gorgeous yet treacherous stretch of Australian coastline.