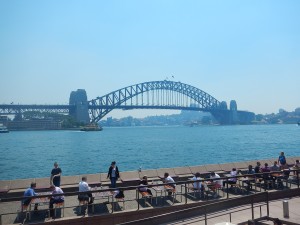 My flight arrived in Sydney early on a Friday morning.  Once I cleared customs, collected my luggage, bought my Australian SIM card and withdrew some Aussie dollars, I got in a taxi and headed to Darlinghurst to meet Tim, my Sydney host, at the Horizon Tower in Darlinghurst.   The Horizon Tower is a somewhat controversial structure in Sydney as it is the sole skyscraper in the area.  Tim’s flat has amazing views of the Sydney skyline including the Sydney Harbour Bridge and Sydney Opera House.  We had breakfast at nearby Forbes & Burton, an adorable restaurant in his neighborhood.

I didn’t feel jet lagged at all since I slept a good deal on the flight from Los Angeles.  It probably might have been the adrenaline rush of being here in Australia for the first time.  Tim and I decided to take a walk towards the Opera House and explore portions of downtown Sydney.  We went up through Hyde Park, by the Archibald Fountain and up to the Botanic Gardens.  I was fascinated by the sights and sounds of exotic birds in the area, particularly the cockatoos and ibises (which look interesting but apparently are garbage birds like pigeons).  The gardens had all kinds of trees, notably the vibrant purple, sweet smelling jacaranda trees.  After exploring the Botanical Gardens, we went to the Government House, which is the residence and office of the Governor of New South Wales. 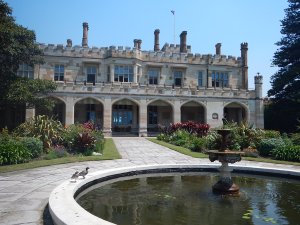 The Government House is built like a castle and has stately late Victorian interiors.  The tour is free of charge and gives you an overview of New South Wales’ political past and present.  Interestingly, the Governor of New South Wales has the ability to sack the government if she wants to by calling an election, although this action has seldom been deployed.  The governors had traditionally been British aristocrats, but more recently they have been native Australians.  The current governor, Marie Bashir, is the first female governor.  She is apparently very popular and has been in office since 2001.  After our tour of the Government House, we walked up to the Sydney Opera House.  It was exhilarating being at such an iconic landmark even if it looks a bit dated (very 70s) and little worn down when you look at it up close.

We had drinks and lunch at the Opera Bar right under the Sydney Opera House and then walked down to the Circular Quay to Pitt Street, one of Sydney’s major thoroughfares with stunning examples of architecture. .

We explored the Strand Arcade and then took an elevator to the top of Sydney Tower to take in stunning 360 degree views of Sydney.

Even after this whirlwind trek around downtown Sydney, I still had enough energy for dinner and drinks on the town.  It was a wonderful and surreal day — still couldn’t believe I was finally in Australia!